Cosmopolitics: The Collected Papers of the Open Anthropology Cooperative, Volume I 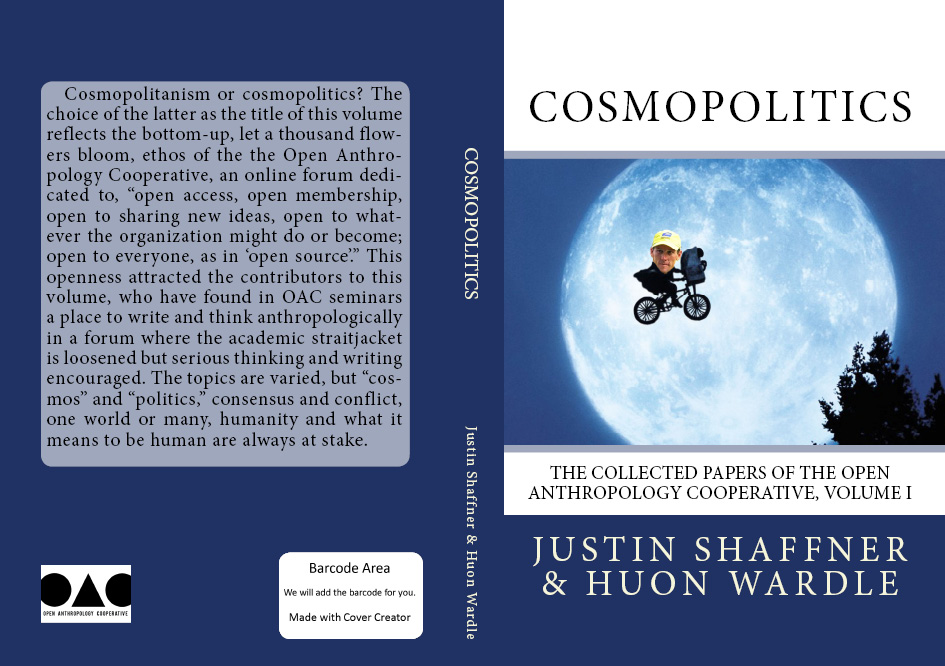 Cosmopolitanism or cosmopolitics? The choice of the latter as the title of this volume reflects the bottom-up, let a thousand flowers bloom, ethos of the the Open Anthropology Cooperative, an online forum dedicated to, “open access, open membership, open to sharing new ideas, open to whatever the organization might do or become; open to everyone, as in ‘open source’.” This openness attracted the contributors to this volume, who have found in OAC seminars a place to write and think anthropologically in a forum where the academic straitjacket is loosened but serious thinking and writing encouraged. The topics are varied, but “cosmos” and “politics,” consensus and conflict, one world or many, humanity and what it means to be human are always at stake.

1. Introduction: Comopolitics as a Way of Thinking
by Huon Wardle and Justin Shaffner

3. What Did Kant Mean by and Why Did He Adopt a Cosmopolitan Point of View in History?
(Working Paper #12, first published 2012)
by Thomas Sturm

7. Why do the gods look like that? Material Embodiments of Shifting Meanings
(Working Paper #2, first published 2010)
by John McCreery

8. An Amazonian Question of Ironies and the Grotesque: The Arrogance of Cosmic Deceit, and the Humility of Everyday Life
(Art of Anthropology #1, first published 2012)
by Joanna Overing

Theme by Anders Noren — Up ↑